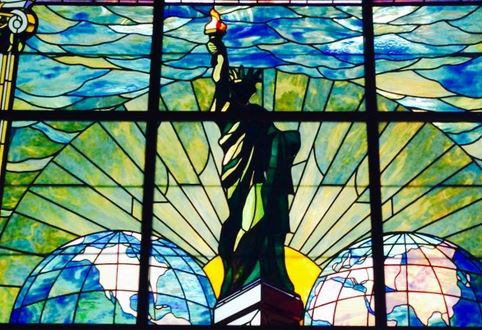 It’s as good a day as any for a straight-up, feel-good (re)post.

If you know Art Cullen, it’s not exactly a surprise to learn his initial words upon watching the livestream of the Pulitzer announcements and learning he’d won for editorial writing.

“Holy shit,” he yelled out to his brother, John, the publisher of the family-run, 10-person Storm Lake (Iowa) Times.

The only surprise was that there wasn’t a longer string of un-family-like adjectives or adverbs.   …

[Cullen] won for editorials that confronted the state’s most powerful agricultural interests, which include the Koch Brothers, Cargill and Monsanto, and their secret funding of the government defense of a big environmental lawsuit. His “tenacious reporting, impressive expertise and engaging writing” were quite self-evident if you’ve seen his labor (which actually spanned two years, though he won for last year’s efforts).

The paper in question is The Storm Lake Times, described in the Pulitzer citation as “a 3,000-circulation twice-weekly newspaper in Storm Lake, Iowa, pop. 10,000, in rural Northwest Iowa.” Click here to link to the editorials for which the prize was awarded.

Here’s an excerpt of Poynter’s interview with Cullen, by James Warren. The take-away? Local journalism matters. It’s not a novel take, but the Pulitzer payoff drives it home. We hope it reminds you and your students that story-telling and journalism are worthwhile.

What would you like to think are the most important points you made in the editorials?

It’s all about transparency in the funding of the environmental lawsuit (defense). We took on the state’s biggest agricultural players and said their donations should be made public. The biggest players: the Koch brothers, Cargill, Monsanto were all conspiring to fund the defense of the (Buena Vista) county.

We found out they (elected officials) had met with Monsanto executives and Koch executives. My son, Tom, did most of the reporting. And he tracked down how the Agribusiness Association of Iowa was working with the Iowa Farm Bureau to funnel the secret donations to the country.

We cried foul and worked with the Iowa Freedom of Information Council. They wrote several letters saying these were public records under Iowa law. They wouldn’t release them, but they shut down the fund. It’s all a matter of transparency in government financing.

How has being in a small place fueled your passion? Is it easier or harder when arguably there’s greater accountability since, well, you may run into people whom you write about on the street?

I lost some friends, but some people don’t understand us, why we would badger county supervisors so that their sugar daddy went away. I said, “Because it wasn’t right.” We felt the public deserved to know who’s paying our bills. We did a lot of groundbreaking news reporting and my son (who’s 24) did most of the heavy lifting.

We’ve spoken before about your work on immigration, especially right after President Trump’s controversial executive order. Is the confusion and fear that we’ve talked about in the Storm Lake area when it comes to immigration still the same?

Things have calmed down. The police chief (Mark Prosser) has calmed things down. He arrives in his police uniform at public forums and says, “We’re not arresting you just because you are undocumented.”      …

What, at first blush, does this recognition say about the people like you, laboring in more isolated environs, busting their asses to survive and believing as you do in journalism?

Journalism really matters, and good journalism is being done all across the country.

Yes. Put in a plug for the Iowa Freedom of Information Council. They are broke and have little support.